In The Politics of Autism, I discuss the Inter-Agency Autism Coordinating Committee and research priorities.

Figure 1 shows the trend in funding for each of the Question areas over time. In 2008, the reported autism research funding for federal agencies and private organizations was $222.2 million and 745 projects. In 2020, funding for autism research among both federal and private funders totaled $409.2 million and spanned 1,536 research projects. Over the thirteen years, autism research showed a general upward trend in funding, increasing by 84% since 2008. However, not all Question areas have shown the same pattern of growth. Question 2 (Biology) is the research area that has shown by far the most dramatic increases in funding, peaking at $195.6 million in 2019. In 2020, research on genetic and environmental factors (Question 3) received the second largest amount of research dollars. Funding amounts for Question 3 started out relatively high in 2008, then dipped from 2011-2014, but have shown relative increases in recent years. Question 1 (Screening and Diagnosis), Question 5 (Services), and Question 7 (Infrastructure) have received largely consistent investments in research since 2008. Funding for Question 4 (Interventions) has also been fairly stable but has been on a slight downward trend in recent years. Research focused on lifespan (Question 6) has consistently received the lowest levels of funding but has shown encouraging growth over the past four years. 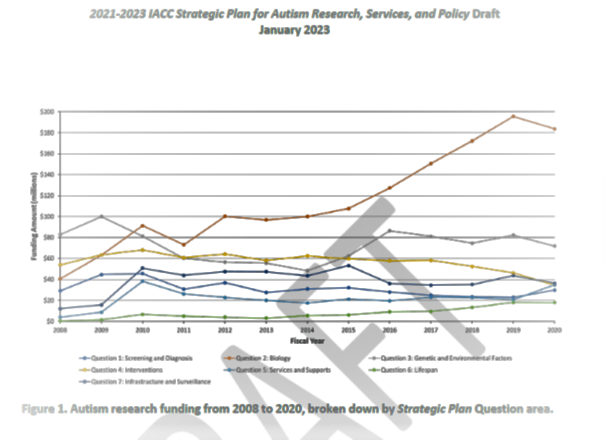