In The Politics of Autism, I discuss the Inter-Agency Autism Coordinating Committee and research priorities.

The federal government provides most of the research funding: Most of the federal money comes from NIH: 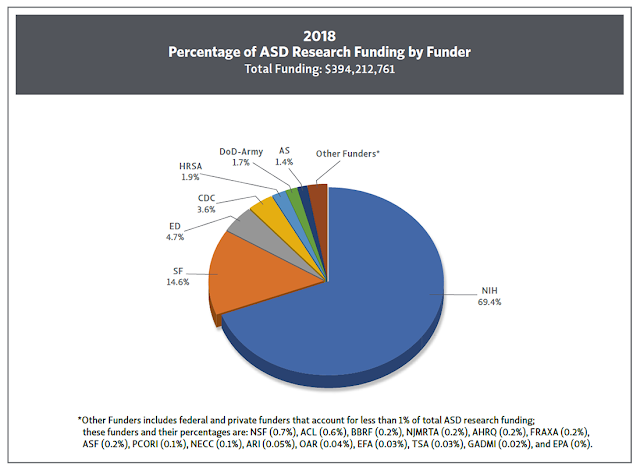 The Army is one of these sources:

The Office of the Congressionally Directed Medical Research Programs (CDMRP) was created in 1992 from a powerful grassroots effort led by the breast cancer advocacy community that resulted in a Congressional appropriation of funds for breast cancer research. This initiated a unique partnership among the public, Congress, and the military. Since that time, Congress has added additional research programs and topics. Funds for the CDMRP are added to the Department of Defense (DoD) budget, in which support for individual programs such as the Autism Research Program (ARP) is allocated via specific guidance from Congress. Since its inception in fiscal year 2007 (FY07) and on through FY20, appropriations totaling $104.4 Million have been directed to the ARP by the Peer-Reviewed Autism Research Congressional appropriation.

CDMRP was initiated in 1992 in response to several forces. One was the emergence of women's health as an urgent public policy issue. In July 1991, for example, the New England Journal of Medicine published several studies showing that there was sex bias in the management of coronary heart disease. In addition, the National Institutes of Health (NIH) had recently launched a women's health initiative and was requiring the inclusion of women in clinical trials.

One attractive source of funding at that time was DOD, which had approximately $29 billion in unobligated funds from prior years for the development of weapons systems planned before collapse of the Soviet Union in 1991.1 Those funds were put off limits by the Budget Enforcement Act of 1990, which established “firewalls” between the budgets for defense, foreign affairs, and domestic programs and imposed strict caps on funding increases in each of the three categories. A number of attempts were made to breach the firewalls by transferring defense funding to domestic programs, including two attempts in September 1992 that would have increased funding for breast cancer research specifically, but they all failed.2 Ultimately, Senator Tom Harkin put forward an amendment to the FY 1993 defense budget to increase funding for breast cancer research within DOD (rather than at NIH) by $185 million, to bring the total breast cancer research program within DOD to $210 million (Watson, 1992). As a transfer within DOD's research and development (R&D) budget, the amendment did not violate the budget agreement's firewalls. The funds were to be taken from the Strategic Defense Initiative and thus would be above and beyond the battlefield medicine-oriented core program of the U.S. Army Medical Research and Materiel Command (USAMRMC),3 which was funded at $410 million in the Senate bill. The “Harkin Amendment for Breast Cancer” which passed in the Senate by a vote of 89 to 4, also stipulated that all projects funded by the resulting Breast Cancer Research Program (BCRP) would have to undergo peer review (Mervis, 1993).