Led by Linda Darling-Hammond, a nationally-recognized education professor from Stanford and chair of the CTC, the group has solicited foundation seed money to hire an executive director and partnered with the San Mateo County Office of Education to provide administrative support.

Darling-Hammond, said in an interview that the crisis has been building for some time, caused, at least in part, by a decision in the late 1990s to relax requirements to deal with a teaching shortage.

“In order to deal with the shortage, the CTC reduced the training – eliminating the requirement that teachers have a basic teaching credential before they learn to teach special education,” she explained. “So many of our special education teachers are not qualified to teach regular education, nor do they have a deep grounding in teaching itself.”
...
California schools serve about 690,000 students with disabilities – about 10 percent of total enrollment and up from 612,000 only 10 years ago. Including federal, state and local contributions, the state’s special education costs totaled about $8.6 billion in 2010-11, according to the non-partisan Legislative Analyst.

According to a 2012 report from the American Institutes for Research, California had one of the lowest identification rates of students with disabilities in the nation in 2009-12 at 6.7 percent– well below the national average of 7.9 percent.

Meanwhile, the state’s students with disabilities ranked 48th in the nation based on 2011 math and reading assessments.

From the AIR study: 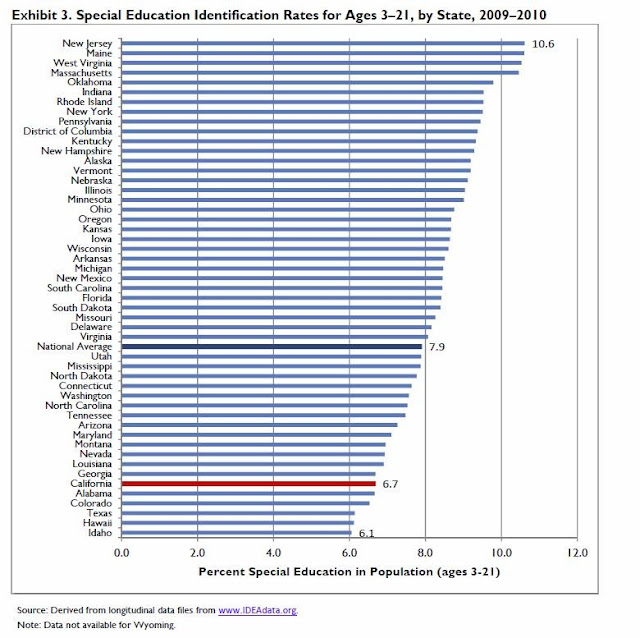