In California, the Legislative Analyst's Office has issued a report titled Overview of Special Education in California. Over the past decade, the prevalence of specific learning disabilities has dropped 20 percent while the prevalence of autism has increased 241 percent. 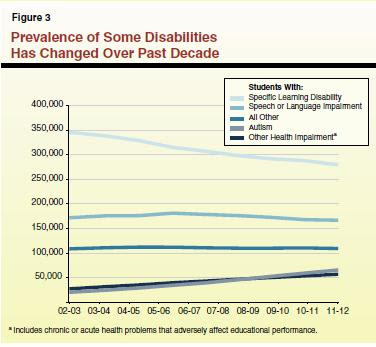 As shown in Figure 8, federal IDEA funds typically cover less than 20 percent of overall special education expenditures. This is notably lower than the amount the federal government originally committed to provide in support of special education services. The IDEA expresses intent to appropriate funding for each SWD up to 40 percent of the national average expenditure level per K-12 pupil, which would equate to roughly 40 percent of California’s overall special education expenditures. The federal budget, however, has never come close to providing states with this amount. We estimate that California would receive roughly $2 billion more annually if the federal government were to “fully fund” the intended level articulated in the IDEA. 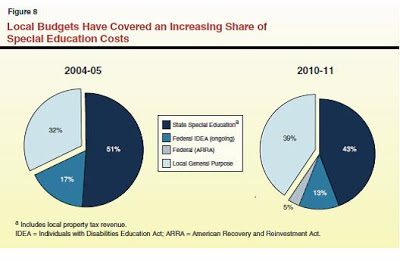