Next to the adorable smiling face of a young boy read the words, “Let’s wipe out cancer, diabetes and autism in his lifetime.”

The last item in that tagline — “autism” — is what got these Seattle Children’s ads pulled from King County Metro buses last Friday.

The Autistic Self Advocacy Network’s Washington chapter (ASAN-WA) organized an online campaign objecting to the ad’s juxtaposition of autism with illnesses such as cancer and diabetes. Seattle Children’s had received dozens of emails, phone calls and comments on its Facebook page when it decided to nix the bus ads.

“Autism is a disability, but it is not a disease. It is not a life-threatening illness,” said Matt Young, co-leader of ASAN-WA. “The idea it’s a state to be wiped out has much negative impact on our lives.”

ASAN is a leading organization in the neurodiversity movement, which seeks acceptance of autism as a variation in mental function rather than a disorder to be cured.

The ad, and the reaction to it, highlight differences in the autism community between neurodiversity advocates who view autism as another way of being and other groups more focused on finding a cure.

On Friday, Seattle Children’s posted an official statement on its Facebook page: “We are sorry for the hurt and anger these ads have caused — that was never their intent.” The episode recalls a similar incident in 2007.  The New York Times reported:

The Child Study Center at New York University said on Wednesday that it would halt an advertising campaign aimed at raising awareness of children’s mental and neurological disorders after the effort drew a strongly negative reaction.

The note about autism, for example, read: “We have your son. We will make sure he will no longer be able to care for himself or interact socially as long as he lives.”The two-week-old campaign, created pro bono by the advertising agency BBDO, used the device of ransom notes to deliver ominous messages concerning disorders like autism,depression, bulimia and attention-deficit hyperactivity disorder.

Advocates for children with autism and for other special-needs children said the ads reinforced negative stereotypes.

“While many individuals spoke to us about the need to continue the campaign, inadvertently we offended others,” said Dr. Harold S. Koplewicz, the Child Study Center’s founder and director, who estimated that he had received 3,000 e-mail messages and phone calls. Thirty percent of those praised the initiative, he said, and 70 percent expressed anger and hurt. 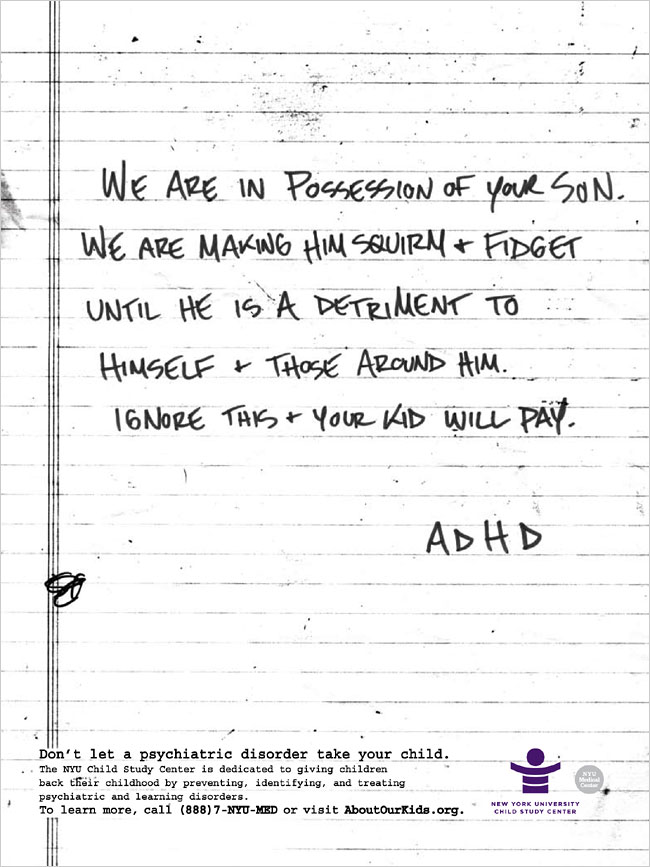