In The Politics of Autism, I analyze the discredited notion that vaccines cause autism. This bogus idea can hurt people by allowing diseases to spread.   And among those diseases could be COVID-19.

Unfortunately, Republican politicians and conservative media figures are increasingly joining up with the anti-vaxxers.  There is a great deal of overlap between MAGA World and the antivax movement.

In the U.S., partisanship is the biggest factor determining vaccination rates. If Democratic voters made up their own country, it would be one of the world’s most vaccinated, with more than 91 percent of adults having received at least one shot. Only about 60 percent of Republican adults have done so.

This vaccination gap has created a huge gap in death rates, one that has grown sharply during the second half of the year.

The chart below is based on data from Charles Gaba, a health care analyst who has split the country into 10 equally sized groups. The Trump line refers to the one-tenth of Americans who live in counties that voted most heavily for Trump last year, while the Biden line is the equivalent for the president’s best counties. The line labeled “swing” describes counties where each candidate won at least 45 percent of the votes: 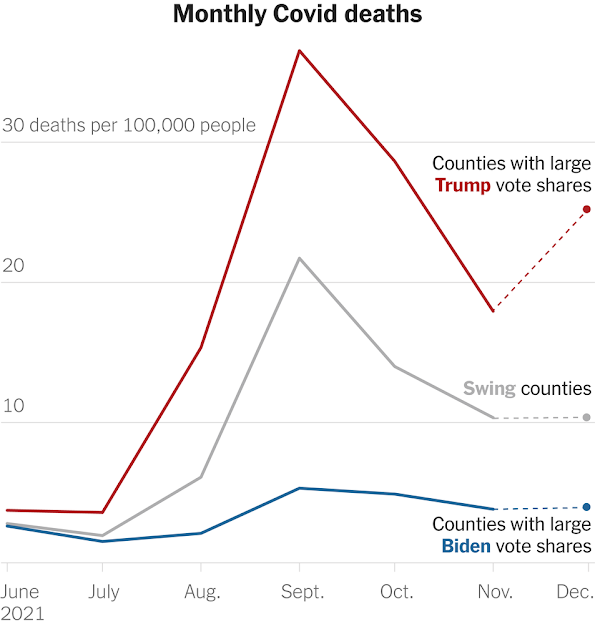 One telling detail is that Covid deaths in both swing counties and heavily Biden counties have not risen over the past two months, even as nationwide case numbers have surged. In heavily vaccinated communities, rising caseloads don’t automatically lead to rising death tolls.

In hundreds of U.S. counties, though, most adults still have not received a Covid vaccine shot. “Just since this summer, 150,000 unvaccinated Americans have needlessly lost their lives despite the widespread availability of vaccines,” Dr. Peter Hotez of the Baylor College of Medicine, in Houston, said yesterday.

Vaccine skepticism stems in part from messages on social media and conservative outlets like Fox News, the Sinclair Broadcast Group and talk radio. Pundits on these platforms often stop short of telling people not to get vaccinated, even as they send a general negative message about the shots.