In The Politics of Autism, I analyze the discredited notion that vaccines cause autism. This bogus idea can hurt people by allowing diseases to spread.   And among those diseases could be COVID-19.
Unfortunately, Republican politicians and conservative media figures are increasingly joining up with the anti-vaxxers.
Aaaron Rupar at Vox:

To be clear, there are some responsible Republican voices urging people to get vaccinated. But the Trumpiest part of the GOP seems to be shifting from vaccine skepticism to outright hostility. At last week’s CPAC event in Dallas, for instance, attendees cheered when author Alex Berenson, a frequent Fox News guest who has built a reputation for spreading misinformation about Covid vaccines, noted that the federal government is falling short of its vaccination goals.

Ironically, the people most hurt by the sort of anti-vax rhetoric that has become commonplace among GOP politicians are their own constituents. As political scientist Seth Masket recently detailed for the Denver Post, there’s a “remarkably strong” correlation between states that Biden won in 2020 and states that have vaccination rates above 70 percent. Along the same lines, NPR reported last month that “Trump won 17 of the 18 states with the lowest adult vaccination rates,” and that “many of these states have high proportions of whites without college degrees.”

“To put it bluntly,” as my colleague German Lopez wrote, “polarization is killing people.”

This rhetoric and the effect it has had in plateauing vaccination rates in the US presents risks for everyone. Children under 12 are still unable to get vaccinated, preexisting conditions mean some groups of adults can’t be vaccinated or don’t get the full benefits of vaccines, and ongoing community spread in places like Tennessee presents more opportunities for the coronavirus to mutate into new and potentially more dangerous variants.

Instead of touting the successes of the Trump administration’s Operation Warp Speed and the role it played in helping Moderna and Johnson & Johnson rapidly develop Covid vaccines, a loud and influential segment of the GOP has opted to try to persuade Trump supporters not to get vaccinated. And the developments in Tennessee indicate that this war against public health science won’t stop with the Covid vaccine.

Sixty-four percent of U.S. adults say they have "a great deal" or "quite a lot" of confidence in science, compared with 70% when Gallup last measured it more than four decades ago. The modest decline overall obscures more significant changes among political partisans. Republicans today are much less likely than their predecessors in 1975 to have confidence in science. Meanwhile, Democrats today have more confidence than their fellow partisans did in the past. 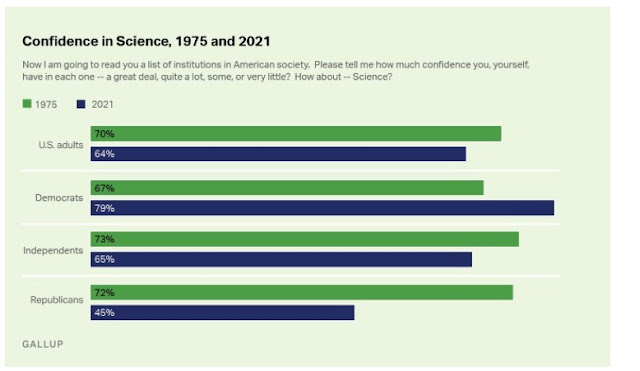