In The Politics of Autism, I discuss interactions between police and autistic people.

With an utter lack of self-awareness, a sheriff's department that arrested an autistic ten-year-old is using its website to tout its support for Special Olympics. 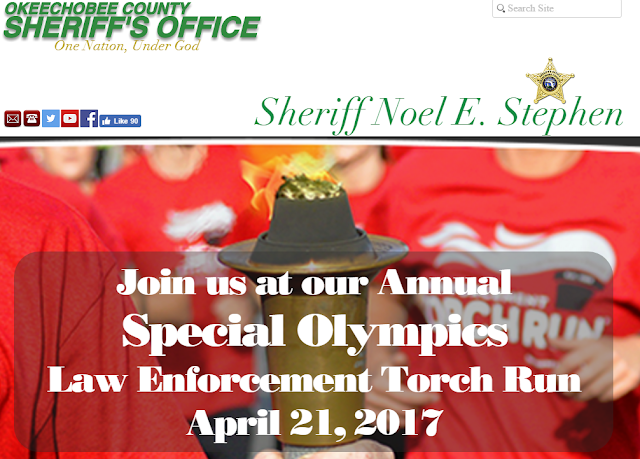 
When John Haygood, a 10-year-old boy with autism, was arrested last week at a school in Florida, he kept repeating that he didn't know what was happening, as seen in shaky cellphone video taken by his mother.

"I don't know what's going on. I don't understand," he cried out. In the video, his hands are cuffed as two officers escort him to the back seat of a police car.

His mother, Luanne Haygood, followed behind them while recording the incident on her phone. In the video, John appears distraught, and yells some profanities.

Luanne is heard in the video speaking to the officers, "Excuse me, do you have any paperwork or anything you can say to me?"

John, a student at Okeechobee Achievement Academy in Okeechobee, Florida, was arrested at the school last week for feloy battery  against a teacher in an October incident, allegedly punching and kicking his teacher, which left scratches and marks, according to an incident report from the Okeechobee County Sheriff's Office (PDF).

The incident occurred after John was being disruptive in class, throwing paper balls around the classroom and hitting other students, the report said. His teacher asked him to go to time out. When John refused, the teacher attempted to remove him, and that's when John attacked, the report said.

The report also noted that John had allegedly made threats to kill the teacher in a previous incident. On November 1, the teacher requested to pursue criminal charges since John "had been given plenty of opportunities to change his behavior and has not," the report said.