Governor Brown signed the California insurance mandate, but without a great deal of enthusiasm. Don Thompson writes at AP:

Health insurance plans will be required to provide coverage for children with autism or other developmental disorders under a bill signed into law by Gov. Jerry Brown on Sunday, making California the 28th state to mandate coverage.

Senate President Pro Tem Darrell Steinberg said his bill is needed to make sure physicians can provide medical treatment for autistic children. Insurance providers currently can deny coverage of development disorders because they are classified as an education service.

Brown said Sunday that he had signed the bill despite concerns about its costs. The California bill will require coverage starting in July 2012.

Brown, in a signing message, also said he is concerned about "effectiveness, duration and the cost of the covered treatments."

The federal government will establish "essential health benefits" under national health care reform, Brown noted. If the coverage under SB946 isn't included as an essential benefit, the coverage will automatically disappear when the bill expires on July 1, 2014. He referenced a recent Institute of Medicine report that said the top priority under the new federal law "is finding the right balance between making coverage available for people to get the care they need and doing so at a cost we can all afford."

Here is the governor's signing message (CLICK TO ENLARGE): 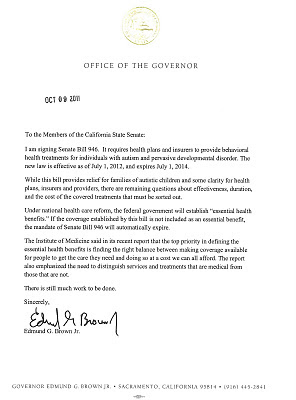